As you scroll through images in this blog, in various magazines, books and papers, and on the GemHunter website, keep in mind essentially none of these gemstones (other than jade and a couple of agates) had been recognized in Wyoming until the GemHunter (Dan Hausel) searched the Cowboy State during a 30 year period from 1977 to 2007. As a curious workaholic, he put on field boots and went looking for gold, gemstones, unique rocks and mapped hundreds of square kilometers of complex geology within old mining districts and mines. Many trips he found nothing, but other times he found incredible mineral and gem deposits - some like few people have ever seen. In Wyoming, these included diamond deposits along US highways and even Interstate 80, opals in a well-used oil field adjacent to a US Highway, rubies, sapphires, giant iolite gemstones, enormous deposits of kyanite, many gold anomalies including a whole new gold district in the Rattlesnake Hills, 13,000 carats of peridot in two anthills, pyrope garnet, chromian diopside, aquamarine, helidor and more. While consulting in Alaska, six geologists (including the GemHunter) found one of the largest gold deposits on earth that at today's gold price, could possibly has more than $230 billion in gold.

Ever since the GemHunter began searching for gemstones in Colorado, Montana and Wyoming, more than a hundred previously unreported gem and semi-precious-gemstone deposits were discovered simply by using sound geological methods that most prospectors can learn in a short time. For example, after the GemHunter made a discovery of ruby and sapphire in a host rock known as vermiculite (referred to as glimmerite in eastern Europe), all the GemHunter did was to pick up a copy of a booklet on 'Vermiculite Deposits of Wyoming' and visited many of the deposits described in the book and identified another 5 ruby and sapphire deposits - sounds simple doesn't it?

Well how did the GemHunter know there was a correlation? Easy. Ruby and sapphire are aluminum oxides (Al2O3) and vermiculite is a mica rich rock enriched in aluminum oxide that was subjected to relatively high pressure and temperature in the geological past. Thus, the chemistry, pressure and temperature were just right to form ruby- and sapphire- bearing vermiculite deposits: now its up to you to search Montana and Colorado for similar deposits, as well as get your own copy of the Vermiculite booklet and search for these gems in Wyoming.

Then the GemHunter found some beautiful specimens of iolite in iolite schist and high-pressure gneiss at Palmer Canyon several years ago. Along with the largest iolite reported in the world at that time, he also recovered many fabulous iolite gems that weighed more than 100 carats each. This led to a second discovery (that he predicted in a publication) at Grizzly Creek Wyoming where he found enormous specimens of gem-quality iolite including the largest ever found. Some were possibly as large as a VW Bug and had to be left in outcrop. As far as we are aware, these still remain untouched!

The early Cordierite report about a deposit at Ragged Top Mountain in the Laramie Mountains likely described the largest gemstone deposit on earth without realizing it. The early geologists searched the cordierite deposit as a source of magnesium, one of the important ions in the cordierite crystal structure, but they never mentioned the presence of iolite or any gem material. But based on their sampling report of the Cordierite deposit - they may have accidentally identified a world-class iolite (cordierite) deposit in several trenches (it is important to note that they did not dig any deep trenches or drill holes on the Ragged-Top Sherman Mountain deposit, thus it is likely there is considerable material at depth!!!).

But based the the early trenching and sampling of the deposit, more than 500 tons of the cordierite (this converts to about 2.5 trillion carats!!!) was measured at the surface. Who knows how much of this was gem quality and how many trillions of carats of the gemstone lie at depth? So what did the Wyoming Government do about this major discovery?

The GemHunter (who was a member of the Wyoming Geological Survey at the time) investigated the fringe of the deposit along the 9th street (Rogers Canyon) road north of Laramie near the old Strong mine and found excellent-gem-quality iolite gems a carat and more in weight in the road cuts providing evidence that the iolite deposit at Ragged Top is rich in the gemstone, but much of the deposit lies on private property. As soon as the GemHunter made the discovery, his field field vehicle was confiscated and he was no longer allowed to conduct field research. The State Geologist and Director even reassigned the GemHunter's field vehicle to his own personal secretary (who by the way never did any field work, let alone much office work). Do you think there was something amiss in the state geologist's office?

Anyway, there were other discoveries made by the GemHunter including peridot in the Leucite Hills, Mexican fire opal in the Cedar Rim area, gold in dozens of places - and the list goes on and on and on.

So, my prospecting friend, all of this information is available in the GemHunter's book on A Guide to Finding Gemstones at Amazon, which is mostly about Wyoming, but the geology and geochemistry, should apply to most places in the world.


After the book was released, several reports of new gold occurrences were made in Colorado, Montana and Wyoming, some valuable diamonds were found in Colorado and North Carolina, opal was found in Wyoming, many gems of labradorite (spectrolite) were reported in Wyoming. Others followed up on the GemHunter's Book and found rubies, sapphires, peridot, gem garnets, iolite and others found gold using the GemHunter's Gold Book.

So, has everything been found and discovered? Not yet. There are still likely hundreds of deposits in Wyoming alone that remain to be discovered and when the GemHunter left Wyoming, he was on the trail of more gold deposits, more ruby deposits, more iolite deposits, more diamond deposits, more spectrolite deposits and also had evidence for more opal deposits including one that could be a major opal and agate deposit near Douglas Wyoming. It is interesting to note that when the GemHunter worked for the Wyoming Geological Survey, at least one to more than a dozen new gemstone and gold deposits were found each year in the Cowboy state. Can any other state make that claim?


It's glad to see your post to for gemstones and you have maintain well your blog which is really nice to see here, keep updating with new post....gemstones stores in Delhi

A book by Hausel at Amazon Gemstones, Minerals and Rocks of Wyoming is a book for collectors, rock hounds, mineralogists and prospector... 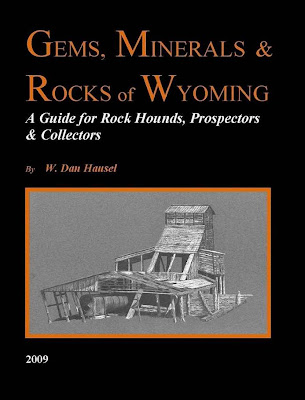